We’ve been told that saturated fat is unhealthy and is claimed to be the cause of heart disease putting you at an increased risk of dying from a heart attack or stroke. Foods that are high in saturated fat include lard, butter, cream, fatty meats, coconuts, and other full-fat dairy products.

In 1913, researchers learned that eating saturated fat correlated with increased levels of 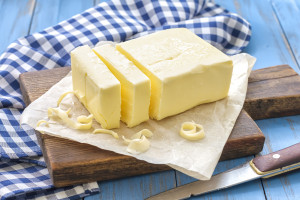 cholesterol in the bloodstream. Some time later, we learned that high levels of cholesterol was linked to increased risk of heart disease. Therefore, it was assumed that eating saturated fat increased your risk of dying from a heart attack or stroke. This was the basis of the “diet-heart hypothesis” and became part of the dietary guidelines before it was ever truly tested and proven. Since that time, obesity has tripled, heart disease has tripled, and diabetes has tripled. The case against saturated fat was pieced together with observational data, short-term trials, animal studies, and guesswork, all showing correlation and none of which proved causation.

It sounds logical that if you ate saturated fat, you would increase LDL levels, and therefore, increase your risk of heart disease. However, there are a few flaws surrounding this logic. The first fact that has been mostly ignored is that saturated fat also increases HDL (good) cholesterol. The second problem with this logic is seen in new research showing different subtypes of LDL, some of which are bad and others not so bad. There are very small dense LDL that definitely drive heart disease by penetrating arterial walls easily and starting a plaque formation which can in turn cause a heart attack or stroke. The other type of LDL is a large, buoyant particle that is too fluffy to penetrate the arteries and start a plaque formation. This type of LDL is neither good nor bad, and does not increase your risk of heart disease. The most interesting piece of information that comes from all of this is the fact that yes, eating saturated fat increases HDL and LDL, however it changes the LDL particles from the small, dangerous form to the large, neutral form. So, even though saturated fat can increase LDL, they are changing the subtype from the particles that are associated with heart disease to the particles that reduce your overall risk.

Cholesterol isn’t all bad. We need cholesterol for many important functions in our body. It is crucial for synthesizing vitamin D and sex hormones like estrogen and testosterone. It works to build cell membranes and produce bile acid to help digest food. Cholesterol isn’t the bad guy, as long as you have the right kind.

Despite thousands of scientists, decades of work and billions of dollars spent, the “diet-heart hypothesis” still has not been supported by any high quality study. The saturated fat myth was never proven in the past, has not been proven today, and will never be proven because saturated fat simply does not increase your risk of heart disease.

Want to know the true culprit to obesity, diabetes, and heart disease? Call us today and make an appointment to take control of your health! Medical Weight Loss Specialists of Bismarck (701) 354-0964.